November 02, 2015
We flew into Barcelona from Zurich Friday night and made it to our apartment just in time to grab dinner at a normal Spanish hour (this means 10pm) then fall asleep. We stumbled upon a (meaning you throw a rock and hit 3) a tapas bar, which was perfect for our first meal here.

Saturday we kept with tradition and went on a free walking tour to explore the city. It was a ridiculously beautiful day out; the sun was shinning, highs of 70 degrees and not a cloud in sight! The founding of Barcelona is the subject of two different legends. The first attributes the founding of the city to the mythological Hercules. The second legend is based on the founding of the city directly to the historical Carthaginian Hamilcar Barca, father of Hannibal. I like the first one better, but much to my dismay, like most cities in Europe, the area was actually developed by the Romans. Lame. 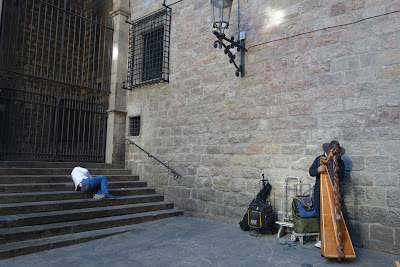 We walked up La Rambla, and toward Montjuïc Castle, which is an old military fortress, dating back from 1640, built on top of Montjuïc hill On our way up the hill, we stopped at a tiny tiny tapas bar, Quimet & Quimet, that was recommended by my coworker. The place was packed to the brim, but the food was great. We go a few sampler plates to try a few things because why not!? D was also excited because they had a house beer that was pretty good, I, on the other hand, have been sampling alllllll of the sangria and have been loving it!

After, we continued our quest and continued hiking the hill and finally made it to the top of the hill and found the castle. It was such a beautifully clear day, you could see for miles up the coast in addition to the whole city and harbor.

Sunday we were able to sleep in which was magical magical thing after a 35,000/15 mile day (thank you FitBit) of walking around the city on Saturday. We started off the day by walking down to Barcelona Cathedral to listen to a small orchestra playing on the steps of the cathedral while older community members danced traditional Catalonian dances. 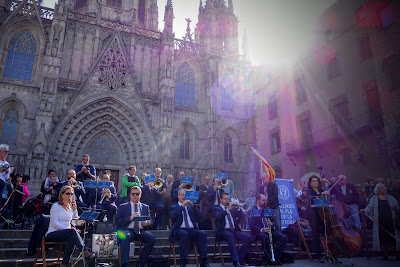 After a siesta (I really could get used to this kind of tradition), we went over to a beautiful restaurant named El Nacional to meet an Argentinian couple we met at dinner the previous night.

So far, my assessment of Barcelona is that there is an irresistible energy: you feel it on the bustling streets and market squares; you see it in the incredible architecture and museums; you taste it in the fabulous food. In summary, this city is amazing.

Things we have learned