July 08, 2010
Vienna!!! I have made my way back to German speaking countries and Im loving it. It is so bice being able to participate in simple, basic conversations again.

I got in last night without any super crazy Czech train problems, although at one point we stopped on the tracks for about 25min and I had no idea why. After amazing Turkish food (something the States needs to get btw) I settled in to watch my Germans dominate Spain..... but did this happen? No. What the heck Germany? It was strangly reminicent of 2 years ago at the EU Cup. So now I hope Spain gets their butt kicked by the Orange Army!!!!

Today I was super excited to explore this city (thanks to the trusty map Amber left behind for me) and boy did it not let me down. It is such a romantic and beautiful city. I took the underground over to the center of the city and just wandered around. Stunning catherdrials, buildings, gardens and history. There is a consert of Mozarts work by the Philharmonic at St. Stephen's Cathedral that I am going to go to tonight. It should be amazing.

About half way through my day I randomly came across a massive group of people, police and military personell all around. So naturally, I had to invesigate. I found at this monument on one side all of the top Austrian Military leaders on the other ALL of the top goverment officals of the Austrian goverment which the national guard facing them and the marching band. Then the Austrian president came in and I was like 50ft away. There were a bunch of speeches, the band played, the President inspected the guard. I love it when I stumble upon on random things. 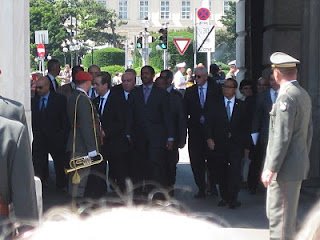