June 16, 2010
My first half day in Zurich… that’s right HALF day. Amber and I arrived here at 2pm after the worst international travel I have ever had. Now don’t get me wrong, I am happy to be here and we were laughing through the whole thing till the last few hours, but seriously ladies and gentleman, fasten your seat belts to read about the craziest 36 hours of your life. To make it easier, I have made chapters for you to follow along…

Chapter 1: Getting to the Airport and Boarding the Plane

•My Aunt forgot her passport at home half way to my house and had to turn around to get it
•Got to airport early!!
•Originally, Amber have a round trip to Munich, but we had previously discussed this with Swiss Air that we were getting off in Zurich with our moms, we get to the airport and find this is not possible
•Lady at the ticket booth… I thought she was going to kill me
•Amber no longer existed according to Swiss Air
•I no longer had a ticket AT ALL
•Amber gets her ticket back
•They have to rebook me and put me on standby with no seat number

•I get a seat on plane however, it is not the original seat with my family and they then mess up ALL of the seats
•Board plane at 6:50pm
•Amber sat alone for 12 hours
•FREE alcohol
•Sleeping Pills
•Stupid Italian lady behind me refuses to let me recline my chair the whole time
•Arrive in Zurich at 7pm
•TSA searched my baggage (however I think they opened it and realized it was too much of a pain the ass because nothing was moved)

Chapter 4: Getting Back to Zurich

•Amazingly remembered a lot my German… which helped A LOT
•Had to pay $230 to get a train back to Zurich
•Had to take a train to Salzburg… the opposite direction of Zurich
•Used a pay phone to call moms… first time using pay phone EVER
•Get to Salzburg and get on train to Zurich supposed to arrive at 7am
•4 countries in 36 hours
•3 countries in 12 hours
•Train to Zurich is DELAYED 6 hours because of an overturned train on tracks, routed BACK to Munich
•Amber thought there was an Ocean in Germany
•Arrive in Zurich at 1:30pm next day
•Didn’t eat since 10pm day before 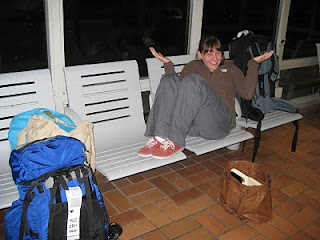 •Moms found us before we got lost searching for the hostel
•Took a shower for the first time since we left
•Amazing Kebab for lunch
•Walked around
•Got serenaded by a quartet
•Got back extra money from bank when we exchanged money
•Super yummy dinner
•Watched the Swiss vs Spain soccer game & Swiss won!
•FINALLY IN EUROPE!!!

In all honesty, it was nuts, but Amber and I we cracking up during a lot of it. When she told we were going back to Munich, I started crying and histarically laughing. The situation got so ridiculous towards the end, that I couldn't not expect anything. Anyways, Im here, finally!